Initially, the idea of the research team was simple: replace the coils of a plasma thruster by permanent magnets. After ten years later and two patents, the thruster designed by this laboratory, whose performance is among the best in the world, is going to be part of an experimental satellite orbiting test.

Indeed, in aerospace, it is well known to use plasma thrusters to maintain such a satellite in geostationary orbit or to move a satellite from one orbit to a second orbit. And, in a context of increasing pollution of space, this new thruster can be very interested for space agencies or companies worried by this major problem.

The present invention relates to a device for ejecting ions Hall effect having a longitudinal axis substantially parallel to a direction of ejection of the ions. The design of a stationary plasma thruster has been completely redesigned by using permanent magnets (instead of coils).
In the asymmetrical geometry chosen, the magnetic field required value is easily generated by annular magnets and by combining various dimensional parameters of magnets. This optimization allows to suppress magnetic shields (necessary for coil propellers) which weighted down the thruster and decreased the flow.
The central portion of the thruster is free of magnetic material (unlike coil propellers). The advantages are to introduce a thermal drainage lowering the nominal operating temperature and to create more powerful thrusters in the future. 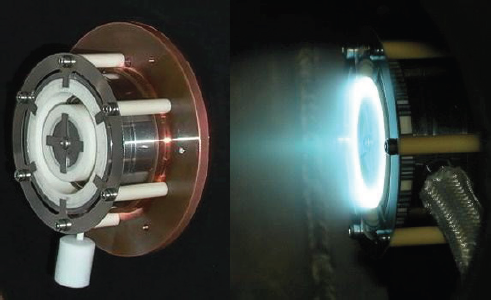 Several versions of the PPI (Petit Propulseur Innovant) were built up, with different magnetic field value (PPI 1 – 3) or different channel cross section (PPI-evolutif S0, 2S0, 3S0). The typical thrust is 10 mN.
Recently a miniaturized version (S0/100) with 0.1mN expected thrust, the so-called µ-PPI, has been designed, built up and tested successfully. The size, the weight, and electrical consumption are compatible for CubeSat nanosatellites.