Changes in cell surface glycosylation are known to be associated with a large number of chronic diseases and the cancer glycans represent a very promising field for biomarker discovery. Among them, specific glycans, such as those terminated by N-acetylglucosamine (GlcNAc) residues are rare on healthy tissues. Other oligosaccharides, rich in fucose (Fuc) residues are markers of inflammation. Lectins have been demonstrated to be very efficient for detecting aberrant glycosylation in biological samples. A new technology is the use of lectin arrays that can contain lectins with large spectra of specificity and therefore characterize variation of glycosylation. The use of lectins extracted from natural organisms may be time-consuming and may generate problems of contamination or variations between batches. Therefore, recombinant lectin technology is starting to be developed. 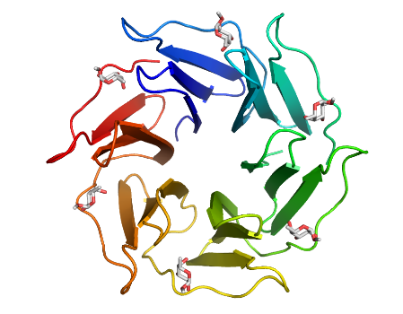 The present invention relates to recombinant multimeric lectins having a beta-propeller architecture, formed from repetition and/or oligomerisation of 4 to 7 modules of approximately 30 to 60 amino acids. The concept of neolectins consist in modifying first the valency, creating a monovalent lectin for which the specificity can be engineered, then recreating lectins with chosen number of active binding sites.

These neolectins have important advantages over extracted lectins. They are recombinant proteins, with higher purity (no contamination) and higher reproducibility than lectins purified from plants of invertebrates. There specificity and valency can be modified to be adapted for recognition of specific epitopes. They are easier, cheaper and faster to produce than antibodies.

This innovation could be used for: – Glycobiology research – Quality control of recombinant glycoproteins (for example for characterizing the glycosylation of therapeutic antibodies) – Diagnostic / Prognostic / Therapeutic follow-up of cancers as leukaemia, adenocarcinoma, kidney, breast and ovary carcinoma, … but also others diseases as rheumatoid arthritis, elderly dementia, … – Diseases treatment, particularly cancers (for drug vectorisation)