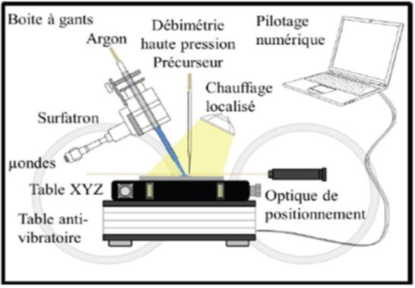 Our Describe technology allows microfabrication through addition or subtraction  of material :
1. The precursor is injected through capillaries which diameter controls the precision of the spot/line.
2. The precursor is transformed in the neighbourhood of the substrate ‘surface thanks to the cold plasma and the material is formed on the surface. In case of reaction between the precursor and the substrate, the  material can be peeled off.
Spots or lines (100nm width) may be superposed, formed with different materials at each step…The XYZ displacements of the table are driven by the computer depending on the design of the component to be realised.

The laboratory has developed  the second generation of pilot scale equipment and first 3D pieces have been demonstrated (pyramids).  Next step include alloy deposition, mixing of particles in the line during deposition; multilayers components…

1. width 100 nm
2. thickness  100nm to 2 μm in one step (one Z movement)
3. any material  (even  polymers) on  any  substrate (no temperature difficulty)
4. controlled atmosphere (N2) for some precursor (reaction of silane withy O2 for example)  but always  atmospheric pressure
5. speed of “writting” 10µm /min
6. material addition or ablation