Use of miR-199a-5p, targets and/or inhibitors thereof for the diagnosis, prognosis and treatment of fibroproliferative disorders

Tissue fibrosis, defined as the excessive persistent formation of non functional scar tissue in response to a chronic tissue lesion, is a worldwide leading cause of morbidity and mortality associated with organ failure in various chronic diseases such as those affecting the pulmonary interstitium. Fibroproliferative disorders are a major public health problem. Indeed, in the USA alone, 45% of deaths are attributed to fibroproliferative disorders.
In particular, Idiopathic pulmonary fibrosis (IPF), the most common and lethal interstitial lung disease of unknown etiology, is a highly morbid progressive disease with an average survival rate of 3 to 5 years post-diagnosis. 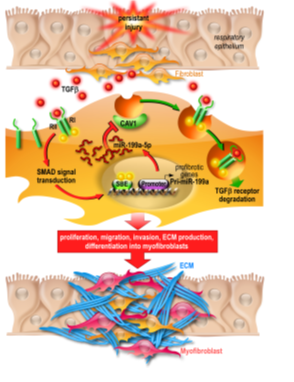 This devastating disease affects about 360.000 patients in the EU/US and causes a substantial socio-economic burden. IPF is a disease associated with aging and as such its incidence is increasing in the whole world. Lung fibrosis is an irreversible phenomenon and, currently, no effective treatment has been shown to reverse this process.

A new strategy based on miRNA has been developped by the 2 teams (Bernard Mari and Nicolas Pottier) associated with the technology. It proposes the use of the miRNA expression profile, particularly miR-199a-5p and the target genes regulated thereby for the diagnosis, prognosis and more particularly the use of miR-199a-5p inhibitors for treating fibroproliferative disorders (pulmonary, hepatic and renal fibrosis), especially IPF.
Interestingly, the inventors established miR-199a-5p as a critical effector of the fibrogenic response to tissue injury and demonstrated its role in mediating TGF-β1-induced lung fibroblast activation by targeting caveolin-1 (CAV1), a structural component of caveolae, known as a potent inhibitor of pulmonary fibrosis.
Two therapeutic strategies are proposed using LNA-based oligonucleotides either designed against miR-199a-5p (anti-miR-LNA) or interfering with CAV1 3’UTR mRNA (CAV1 Target Site Blocker, TSB). 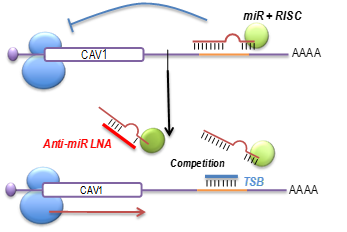 Mir-199a is a critical effector of the TGF-β pathway, a major pathway involved in the activation of fibroblasts into myofibroblasts.
The proposed inhibitors are of a small size, and TSB allow more specificity of action on the target CAV1.

The technology address the field of fibroproliferative disorders, more particularly it may be used for the diagnosis-prognosis and the treatment of the IPF.
The market of the IPF is estimated to reach 4.6 billion dollars in the USA and Europe in 2020.

– Optimization design of the inhibitors for in vivo administration (partnership with biotech);
– In vitro tests and selection of the best TSB;
– In vivo  pre-clinical evaluation of miR-199a-5p inhibitors are ongoing in a mouse model of pulmonary fibrosis and show promising preliminary results;
– Upcoming steps:
In vivo tests with CAV1-TSB;
In vivo activity-survival.