Medulloblastoma is a tumor of neuroectodermal origin occurring mainly in childhood. A subtype of pediatric medulloblastoma tumors is characterized by activated hedgehog (Hh) pathway, a pathway involved in the embryonic growth and development of organs. Ongoing clinical studies of inhibitors of Smoothened (Smo), a key receptor mediating the Hh pathway, have shown promising activity in Hh activated basal cell carcinoma and medulloblastoma. Nevertheless, as for most anticancer agents, resistance mechanisms have been reported in animal models of Hh-driven tumors and in a patient with medulloblastoma metastasis treated with a single agent (GDC-0449, Genentech) due to an acquired Smo mutation disrupting the ability of GDC-0449 to bind Smo.

To allow the development of new Smo inhibitors, we have delineated a pharmacophore based on the structure of reference Smo antagonists. Then, we have selected a collection of compounds obtained from in silico screening of a virtual library (500,000 commercially available « drug-like » molecules) based on the design of this pharmacophore and identified 20 chemically unrelated ligands that we have ordered and tested in several Hh assays. Among them, we have identified a new lead called MRT-10 [1]. By structure-activity relationship, we have synthesized and characterized MRT-83 and MRT-72 that belong to novel families of molecules with original chemical structures that have been patented.

The compounds could be mainly used as a drug for the treatment of tumors associated with a hyperactivation of the Hh protein signaling pathway (medulloblastoma, glioblastoma, basal cell carcinoma, rhabdomyosarcoma, pancreatic cancer etc.). Furthermore, in addition to cancer, these compounds can find applications for the treatment of a large number of diseases, notably diseases in which a blockage of the Hedgehog signaling pathway could be beneficial, such as diabetes.

Specificity and potency:
MRT-83 does not display antagonist activity towards the Wnt signalling pathway [1] and towards a panel of kinases, GPCR and transporters (unpublished data, primary screen done at CEREP).
MRT-83 and MRT-72 block the binding of Bodipy-Cyclopamine to rodent and human Smo (Table 1). MRT-83 displays a similar potency compared to GDC-0449 and LDE225 whereas MRT-72 is the most potent Smo antagonist described so far (Table 1). We have developed a tritiated form ([3H]MRT-72) which can be used as a selective and potent Smo radioligand. 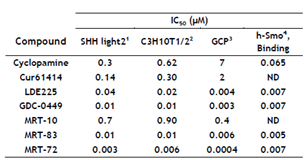 Back up MRT molecules:
Interestingly, we have shown that the guanidine MRT-83 can be synthesized by the transformation of a thiourea or a urea function [2]. We have shown that the thiourea and urea analogs of MRT-83 are also very potent antagonists of Smo [2]. They represent back up analogs in our studies.
Thus, we have synthesized and characterized MRT Smo antagonists that are among the most potent Smo antagonists known so far. At our knowledge, we are the first academic groups in Europe and at an international level to have proprietary Smo antagonists displaying subnanomolar potency. The emergence of resistance to Smo inhibitors has been only documented in one patient with medulloblastoma, the potential emergence of resistance has to be monitored more carefully in the ongoing clinical trials of Smo inhibitors in medulloblastoma, BCC and in other cancer. Therefore, evaluating the effects of MRT-83, MRT-72 and their backup analogs in mouse model of Hh driven medulloblastoma is of major interest.