Reforming tar in the steam gasification of biomass

Since the increase in petroleum price , interest in use of biomass as a partial replacement for fossil fuels via biomass to liquid (BTL) or biomass to gas (BTG) processes is increasing. One of the most crucial problems in biomass gasification technology is the removal of tar, which is a mixture of condensable aromatic compounds. Tar can condense or polymerize into more complex structures in exit pipes, heat exchangers or on particulate filters, leading to choking and attrition This can result in a decrease of total efficiency and increase of the cost of the process. Tar elimination from the gasification product is necessary for any industrial application particularly for Fisher Tropsch or hydrogen use in fuel cells.

The present invention relates to a catalyst including an olivine substrate on which an iron compound layer is deposited, produced by impregnating the olivine substrate with a solution including an iron salt, and then heat-treating same. Said catalyst is useful for steam-reforming tar, in particular in gaseous media from the steam gasification of biomass. Further, the catalyst can be used alone for catalyzing the steam gasification of organic compounds from biomass while limiting the amount of tar produced in the synthesized gases.

The catalyst can be used both for the reaction of tar reforming and biomass gasification associated with water gas shift reaction (WGSR). It has the same activity on tar reforming than Ni-olivine based catalysts but presents low friability, no toxicity and lower cost of preparation. It helps to reduce by at least a factor of ten the tar contents of biomass gas and to increase hydrogen contents both by tar reforming and WGSR. It is also effective for ammonia (NH3) and some sulfur compounds removal.

Scale-up of the catalyst has been realized from 20g to 1000kg and the prepared catalyst tested in a 1 MWth fluidized bed pilot plant. Both a significant improvement of gas and hydrogen yield and a drastic decrease of tar and methane content compared to olivine have been obtained in similar operating conditions.

Operating conditions of biomass steam gasification tests and percentage variations of the main gasification parameters, with respect to the blank test I (results obtained with the biomass bubbling fluidized of University of Teramo, Italy). 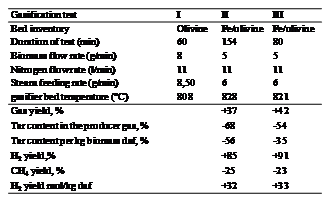 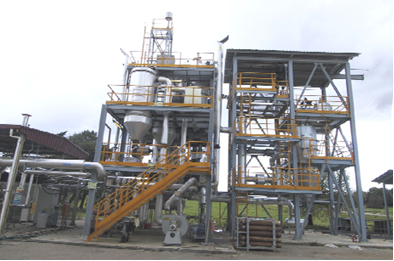