Lithium batteries became essential components in many devices. However, these batteries offer low energy density and have to be recharged through the electricity grid leading to limited quantities of available energy.
Besides, in the last decades, devices transforming solar energy into electricity have been developed such as dye sensitized solar cell. However, they cannot stored the generated energy.
Photorechargeable batteries have therefore been proposed. However, performances one can get with these devices are limited, especially because of the low discharge kinetic reaction.
None of the documents of the prior art describes a device that first allows the conversion of light energy into electricity as well as it storage in the form of chemical energy and secondly shows good storage capacity. Such device will greatly benefit from its independence from the electricity grid due to its autonomous photorecharge.

In the present work, the inventors have developed a transparent photorechargeable electrochemical device that can store energy and be recharged under lights.
This invention is clearly a disruptive innovation in the field of energy storage and conversion through the combination in one device of 1) the conversion of light energy into electric energy and 2) its storage in the form of chemical energy.

The device as described above has been fully assessed on a laboratory scale: discharge, recharge and photorecharge.
The energy density of the tested device is 30 kWh/kg.

Apart of the previously stated benefits. 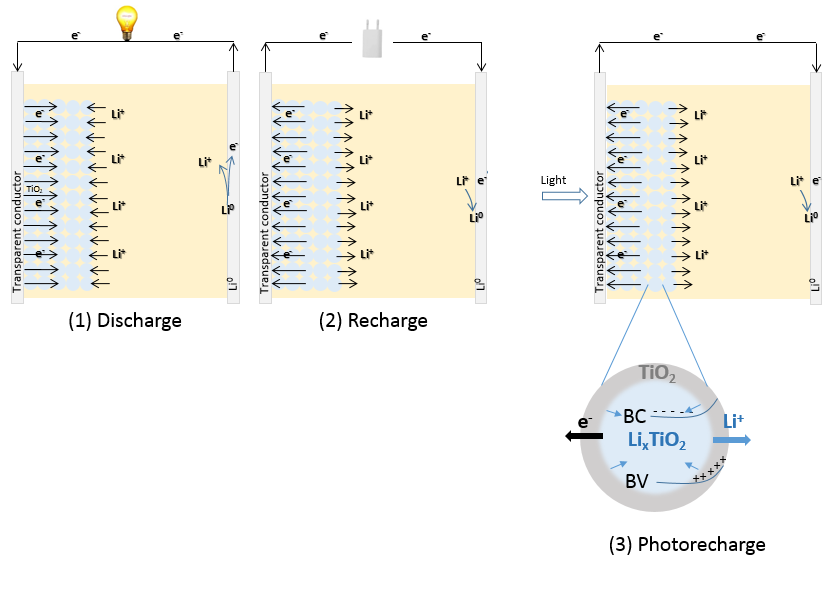