This invention deals with new one-dimensional nanocomposites coated on textiles fibres to develop highly efficient chemical and biological agents degradation. In one particular embodiment, the nanocomposites are titania based nanotubes and are deposed on the textile fibres using the Layer-by-Layer deposition method allowing a strong anchorage as a thin layer film of controlled thickness on the textiles fibres. These new photocatalytic textiles resulted in a high activity toward gaseous and liquid chemicals and biological agent elimination, exhibiting in particular much higher activity than textiles modified with conventional and commercial TiO2 particles.

For example, as shown in the figure below, the kinetic of elimination of a specific chemical agent (dimethylmethylphosphonate (Sarin and VX simulants )) can be significantly improved.

These photocatalytic performances are non sensitive to relative humidity and the degradation process is efficient between -10°C and 100°C. 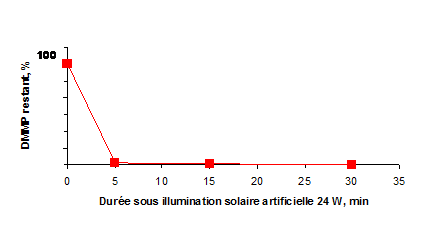 Originally designed for military and NRBC applications, these textiles are reducing risk of secondary contaminations by in-situ degradation of chemical or biological agents impregnated in the contaminated tissues. Due to their optimal degradation properties , they induce a sensitive diminution of the cost of treatment of contaminated textiles.