Microtubules (MTs) are essential components of the cytoskeleton. Subpopulations of MTs can be differentially marked by several highly conserved post-translational modifications (PTMs). These PTMs are particularly abundant in ciliary and flagellar axonemal MTs. Cilium and flagellum are ubiquitous cellular extensions which are essential not only for motility (in protozoa, sperm, respiratory epithelia, brain ventricules…) but also for ensuring sensory functions during development and normal physiology (photoreceptors, olfactory cells, renal cells, neuronal cells…). The laboratory has focused on biochemical characterization of tubulin, and has discovered in Paramecium, a post-translational modification (PTM): polyglycylation (published in Science 1994). Thanks to antibodies developed in the laboratory, AXO 49 and TAP 952, this PTM has been shown to be highly conserved over evolution, ranging from the single cell, like protozoa, to humans. Polyglycylation occurs mainly, if not exclusively, in cell types that have cilia and flagella.

The invention consists in two hybridomas producing two monoclonal antibodies targeting, in several cell types and organisms, a post-translational modification (PTM) of tubulin: glycylation. TAP 952 targets mono-glycylated tubulin (lateral connecting branch of 1 glycine unit on the C-terminal sequence of tubulin) and AXO 49 targets polyglycylated tubulin (lateral connecting branch of a polymer of at least 3 glycines). The validity of the epitope recognized by the antibodies has been assessed by testing their specificities on synthetic peptides having a sequence identical to the C-terminal sequence of Paramecium tubulin, on which glycin polymers of various lengths are branched. 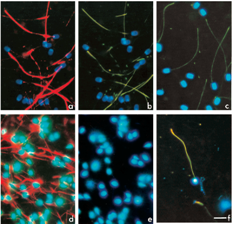 Double immunolabeling of axonemal microtubules of lemur (a,b,c) and human (d,e,f) spermatozoa with an anti-tubulin sequence polyclonal antibody (red in a and d) and AXO 49 (green in b and e), and single staining with TAP 952 (green in c and f). DNA was labeled with Hoechst. Bar.

These two antibodies are immunological tools for the visualization of polyglycylation in cilia from various cell types (cf figure).
They are the only antibodies available for this specific PTM of tubulin. Commercial anti-tubulin antibodies are targeting a sequence of tubulin, that means they target all tubulin isotypes in the cell or in the tissue. For example, among a wide panel of microtubules, like in brain, AXO 49 and TAP 952 can be used for detecting specifically the presence of cilia. Other commercial antibodies target other tubulin PTMs like acetylation, detyrosination or phosphorylation.

AXO 49 and TAP 952 have applications either for tubulin functional studies or for health related research (ciliopathies, morphogenesis). They have already been used in various cells, organisms and tissues : Paramecium, Giarda, oviduct, trachea, olfactory and nasal epithelium, vestibular tissues, neuronal cells, spermatozoïds…
New applications of these tools will arise as, recently, other proteins than tubulin have been shown to be glycylated.