miRNA as new targets for the treatment of respiratory diseases

Multiciliated cells lining the surface of some vertebrate epithelia are essential for various physiological processes, such as airway cleansing. In many respiratory diseases, among which asthma cystic fibrosis and chronic obstructive pulmonary disease, these cells lose their cilia and cannot evacuate mucus and noxious particles anymore. It is thought that restoring this physiological feature may be of great help in the treatment of respiratory diseases, but until recently, little was known on the molecular pathway of multicilogenesis.

Dr Marcet’s team has described new microRNAs specifically expressed in multiciliated cells and implicated in the biosynthesis of these particular structures. When administered to cultured cells, the miR, or their antago-miR, modulate the expression of a panel of genes and are able to induce or block the formation of motile cilia.
In particular, miR449 has been shown to be strongly accumulated in human airway epithelium and Xenopus laevis embryonic epidermis, where it promotes multiciliogenesis and centriole multiplication by directly repressing the Delta/Notch pathway. 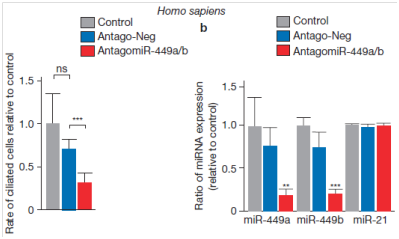 HAECs (n=6 donors) were chronically treated with anti-miR-449a/b or control antagomiR (20 nM) during the time of differentiation, typically for 21 days at an air_liquid interface. (a) The relative rate of multiciliated cells was defined as the ratio of the number of β4-tubulin-positive cells to the number of nuclei (20 fields per filter, and 3 inserts per donor, n=6 donors). The histogram indicates the relative rate of multiciliated cells per field in each experimental condition, with the control set to 1. Data are means ± s.d. from six donors (***, P <0:001, Student’s t -test). (b) Real-time RT-PCR experiments indicate that antagomiR-449a/b inhibits miR-449a and miR-449b expression and has no effect on the unrelated microRNA miR-21.
Data are means± s.d.  from six donors (ns, not significant, **, P <0:01, ***, P <0:001, Student’s t -test).

This invention consists in new targets for the treatment of respiratory diseases which enable restoration of a functional respiratory epithelium, and provide means to monitor the state of health of multiciliated epithelia. MicroRNA and their antago-miR are short ribonuceic acid molecules which have proven to be more stable and less fragile than longer RNA or DNA molecules used in genetic therapy. The feasability of their administration by inhalation is very likely.

The in vitro proof-of concept has been obtained on cell lines and nasal mucous tissue for several miRNA. Validation is ongoing on mouse models of asthma.