Microfluidic device for detection of lead

The invention concerns a microfabricated device for the selective detection of lead, especially in water, by a fluorescence method. The microchip-based lead sensor contains a Y-shape microchannel equipped with a passive mixer and moulded in a silicone polymer (PDMS) stuck on a glass substrate. One input is used to inject the water sample and the other input for the sensitive fluorescent probe. An optimization of the microcircuit length has been performed in order to have a full complexation of lead by the fluorescent probe (calix-DANS4). The detection is performed by using a configuration in which the sensing molecules are excited by two optical fibres, each one connected to a 365 nm UV LED, and the light collection is made by another optical fibre with a photodetector. By using this configuration, it is possible to detect lead with a detection limit of 2 ppb.

This detector, which is based on fluorescence detection, does not use expensive equipment (no laser, no microscope). Its sensitivity is below the maximal admissible concentration of lead in drinking water. Furthermore, due to the molecular design of the probe,its selectivity for lead detection is high : the detection of lead can be carried out in presence of high concentrations of calcium and sodium, but also in presence of iron, zinc, copper, mercury, chromium at concentrations lower than 10- 4 M. It can works in flow injection regime or in steady state mode.

Pb2+ is considered as a highly toxic heavy metal ion causing environmental and health problems. Its maximum admissible concentration in water will be fixed below 10 ppb in drinking water in 2013 (EU regulation). This detector is suitable for the determination of lead in all water samples (after a usual pretreatment to eliminate solid particles and organic compounds), but also in other organic liquids or solids after an extraction phase.

A prototype has been built with laboratory components and conventionnal equipments. Injection of solutions in the microfluidic chip is made with a syringe holder. Data are collected on a PC computer. An integration of all the parts (pump, power supplies, light source, detector) is feasible and could lead to a portable apparatus, very competitive with other commercial apparatus based on electrochemical detection.

The development of new fluorescent probes for the selective detection of other heavy metal ions (already done for some of them) will allow parallel detection of several heavy metals on the same device. 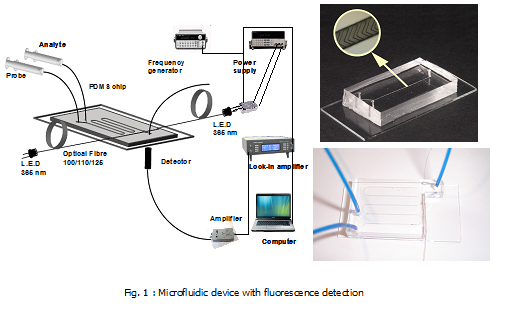