Photobioreactors (PBR) have been widely researched and used in biomass microalgal culture for more than two decades, but most of them were just used in laboratories or in pilot or experimental bases. There were only few of them being real used in industrial or commercial algal production. Production rate was not economically sufficient due to oxygen built up in the culture medium, overheating inside the closed system, shear force damage to the algal cells, high costs of infrastructures of the whole system, or to the operation complexities… etc. All these limitations had to be faced before  scaling up PBR into real commercial production.

The echnology is base on the association of an inclined and enlightened plane on which the  stream of microorganisms in suspension flows and a transparent tube parallel to the inclined plane in wich the suspension is lifted up upstream to close the loop. Dark volumes are avoided in the system and the angle of said plane with the ground can be raised.  The thickness of suspension on the plane can be as small as 1.5 cm or below without loosing in production rate as the rate enlightened surface/culture volume is encreased.(see fig 1). 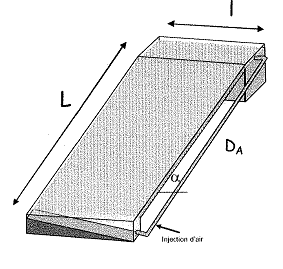 fig1 : example of the PBR

As any closed system the PBR will see its temperature evolving according to a balance between the flow of heat entering by radiation, the flow of heat consumed, produced and stored within it and the flows exchanged with the outside environment. To obtain such effect a thermal valve (phase change material) is enclosed in the enclined plane (non transparent wall of the PBR) in order to control the temperature evolution in a passive way. To enhance this effect the transparent plane may be chosen in non IR transmitting glasses (such radiations are not used by the microorganism but increase the temperature). In another embodiment a thermal exchanger may be placed in contact with the thermal valve to increase its effect.

High enlightened specific surface and gas/liquid surface, no mixing.
Biomass concentration up to 1g/L has been obtained.
Closed PBR (control of atmosphere) which the external wall is not in contact with the suspension, limiting the biofilm formation.
No mechanical parts.

This innovation could be used for bio-energy (energy production from biomass or hydrogen), agriculture (production of vegetal proteins, biomass for aquaculture) and environment (waste water treatment or C02 capture).
Said thermal management system is limited neither to PBR nor to thin PBR. Any reactor of various geometries exposed to thermal problems may be equiped.

A prototype exists in Nantes and thermal modelisation have shown the real advantages of the different thermal systems proposed. The two teams involved in these developments have very complemetnary skills; PBR on one side and thermal management and solar energy on the other side.