Packaging with two-color visual effect for decoration or identification

Packaging constitutes an important vehicle for the image of a brand. We propose to produce thin films having bichromatic properties that can be deposited on any transparent or translucent substrate (glass, ceramic, polymer .. ) , the two-color effect being not dependent on the angle of observation.
Thus, when a light source is placed behind the material, it will appear a certain color, called ” transmission color “; and when the light source is located on the same side as the observer (ie in front said material ) , it appears in a different color so-called ” backscattering color “. These colors are a complementary pair (mixed they cancel the perception of color, producing a neutral gray). An early example of this type of property dates from the fourth century. This is the so-called glass Lycurgus cup ( in the British Museum) . It appears green and rather opaque when illuminated from the outside but if the light source is placed inside (the light is transmitted ), it appears red and translucent. To date no one has been able to explain how such an object had been produced. (see fig in the Word document) 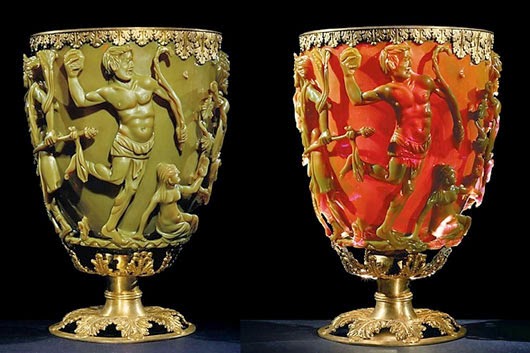 Failing to answer this question we have developed a process for producing a two-color material in the form of a transparent film comprising monodisperse nanoparticles consisting of gold and possibly other precious metals or copper (NP) and an aqueous or organic solution containing at least an organic macromolecule. Once the solutions containing the nanoparticles and the organic macromolecule are mixed together a film is deposited on the substrate (transparent or translucent) by conventional methods (dipping, spinning…), and dried.
The choice of macromolecules is very wide and varies with the use of the final product and with the substrate (polysaccharides such as chitosan, chitin, cellulose, cellophane, … synthetic polymers such as PMMA, PS, PE, PP, PA …)
The production of such NP presents no difficulties, various methods (Turkevich-Frens for example) are known. Depending on the desired colors the nature and diameters of the NP  and as well as the  thickness are adjusted. 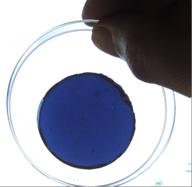 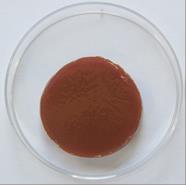 – An original bichromatic effect which is stable over time
– No handling of  NP as such ; they are formed in solution and the solutions are mixed together to carry out the deposition .
– Large range of colors and light intensity depending on the nature of NP
– low NP concentration

– Packaging /objects decoration
– Means of identification : due to low film thicknesses the film can be used as “small touch” on specific areas
For further information, please contact us (Ref 06693-01)