EP19305025.9 priority patent application filed on january 08, 2019 and entitled “USE OF POROUS 2,5-FURANEDICARBOXYLATE-BASED MOFS FOR IMPROVED SEPARATION OF BRANCHED ALKANES”

Pending Patent applications in: EP, WO

Gasoline with a high octane rating results in less engine knocking in internal combustion engines and improved engine performance. At present various processes can be used to increase the research octane number (RON) of gasoline to about 90. However, separating paraffins is of paramount importance to these industries because the octane rating is directly related to the amount of linear paraffins and branched paraffins present in the fuel. Furthermore the reduction of harmful emissions is a matter of global concern. Thus the separation of linear paraffins from branched paraffins have become increasingly important and the oil and gas industries strive to  do so at reasonable costs.

This patent consists in a new adsorber bed to obtain a rich 22DMB, 23DMB and iC5 stream with high RON arranged like in a typical TIP process.

The figure bellow shows the breakthrough curves for a mixture of C6 isomers at the milligram scale with powder of the new adsorbent. The dibranched isomers elute first around 1.8 moles fed, followed by the monobranched isomers around 2.2 moles fed and finally nC6 leaves the column after 2.6 moles fed all per unit kg of the adsorbent. This represents a clear separation between each class of ramification resulting in a high RON mixture of 94.9 if the experiment would be stopped at 2.6 moles fed mark indicated by the black line. At this point the total productivity obtained is 0.65 mol/kgads and the recovery of 22DMB and 23DMB is 62.7 %. This productivity is the amount of paraffins that has eluted from column up to this point while the recovery is the ratio of 22DMB and 23DMB produced divided by the quantity fed of the same isomers 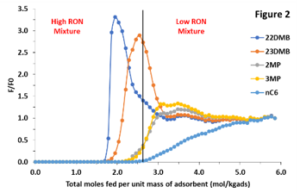 Experiments were also carried out at the gram scale with a mixture of C5/C6 isomers using a new shaped form of the adsorbent (beads form with size around 1.5 mm). In this case an additional adsorbent was used to form an adsorber bed to improve the desired separation and the mixture obtained had a RON of 92.3 and total productivity of 0.59 mol//kgads. These large scale experiments confirm the results obtained at the milligram scale with only C6 isomers, letting the mass transfer front of the high RON compounds 22DMB, 23DMB and iC5 advance further in the bed so that only these isomers elute separated from low RON ones, resulting in a high RON mixture obtained.

Gram scale cyclic experiments in a PSA: Results are similar to the previous experiments confirming the desired adsorption separation capacity of the mixed bed : mass front of 22DMB and iC5 have left the column while the mass front of 23DMB is concentrated at the edge of the mass transfer zone; while for the low RON isomers, the majority of their respective mass transfer front remains inside of the column resulting in almost no elution. This results in a 91.4 RON mixture with a productivity of 0.07 mol/kgads and a recovery of 23.0 % of 22DMB, 23DMB and iC5.

Even after several PSA experiments with various cycles the mixed bed retained its adsorption capacity, showing its durability and reliable performance.

Future work will be to up-scale this process to an industrial stage by performing pilot tests with an adsorber bed at the kilogram scale.