Compounds for the treatment of mitochondrial diseases

The present invention relates to the isolation and development of drugs to treat mitochondrial pathologies involving a deficiency in ATP production via the oxidative phosphorylation pathway, such as NARP syndrome.
NARP (Neuropathy, Ataxia and Retinitis Pigmentosa) is a maternally transmitted hereditary syndrome characterized by retarded development, and accompanied by retinitis pigmentosa (RP), dementia, ataxia, proximal neurological muscle weakness and sensory neuropathies. The clinical manifestations are varied and can take more or less severe forms. Thus, the ophthalmic manifestations can range from a simple “salt and pepper” changing of the retina to severe RP, accompanied by maculopathy. Similarly, there is a broad 15 spectrum of neurological manifestations, which ranges from simple migraines to severe dementia and to “Leigh’s disease”. Many retinitis pigmentosa related syndromes exist, such as Usher’s syndrome in which both the sight and the hearing are affected, or else macular dystrophy, also called inverse RP.

There is currently no effective medicament for the treatment of 15 mitochondrial disorders induced by ATP synthase dysfunctions. This is part due to the absence of a cellular model for mitochondrial mutations. In a prior work, we developed a cellular model for the NARP syndrome, consisting in yeast strains carrying within their mitochondrial genome, the equivalent of mitochondrial ATP6 gene mutations responsible for NARP syndrome in humans (see the International PCT Application WO 2007/125225 by the same team of inventors).
These yeast mutants make it possible to screen chemical compound libraries and to identify molecules capable of correcting the effects of the mutation by restoring either ATP synthase function, or sufficient production of ATP in the mitochondria.
The ability of compounds of general formula (I) to restore respiratory growth has then been characterized. Most active derivers of these compounds are actually being characterized, and enabled to choose sodium pyrithione as the most active compound in order to restore mitochondrial functions in NARP, but also in other diseases involved ATP synthesis dysfunction (LHON or MILS). 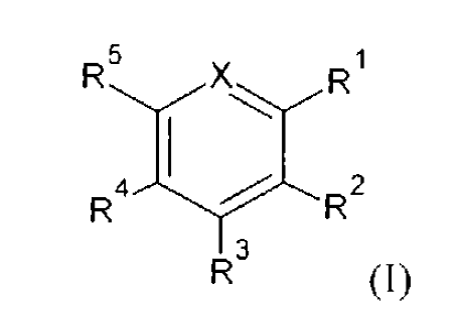