Ammonia is one of the most abundant and least expensive synthetic inorganic chemicals. It is made industrially from dinitrogen and dihydrogen under harsh conditions (up to 550°C and 350 atm) by the catalytic Haber-Bosch process. Production, which requires 1% of the energy consumed annually by humans, reaches 108 tones. This scale is equivalent to that of the biological reduction of dinitrogen to ammonia by nitrogenase enzymes which represents the main source of nitrogen for living organisms. Ammonia is also the common nitrogen source for the industrial production of fertilizers and organic amino compounds. It is therefore evident that the development of new processes using NH3 as feedstock constitutes a very important research target. N-H bond activation involving transition metals or singlet carbenes has attracted increasing attention but remains difficult. The other way to activate NH3 involves the well known formation of Lewis acid-base adducts between transition metals and ammonia (Werner-type complexes). In this field, catalytic reactions consuming NH3 are extremely rare.  Recently, palladium catalyzed amination of non activated aryl halides using ammonia has been reported by Hartwig and Buchwald in the presence of bulky ferrocene or electron-rich phosphine ligands. Here there are drawbacks: ammonia pressure in one of the two methods (5-6 bars), the use of strong bases, a toxic and expensive metal and sophisticated supporting ligands. 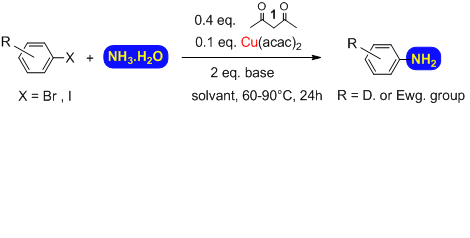 The amination of both activated and unactivated aryl or heteroaryl bromides and iodides can be achieved under very mild conditions using aqueous ammonia, a convenient and cheap source of NH3, in a catalytic system employing the less toxic and inexpensive metal copper supported by simple diketone ligands (other ligands are possible).

We have discovered a general, practical, economical and efficient method for transforming aryl iodides and bromides into anilines in one step. This biphasic catalytic procedure is very special and work is currently in progress to elucidate exactly how it functions. The very low operational pressure allows this reaction to be performed without the autoclaves required for work with liquid ammonia, and this should be an enormous advantage on scale-up in both cost and safety. The convenience of aqueous ammonia and low cost of the copper catalytic system make this method easily adaptable to industrial scale production, especially where safety and environmental factors are of the greatest concern. We believe that the simple procedure outlined here is extremely competitive with existing palladium-based catalysts and that it will rapidly be adopted in custom synthesis and industrial chemistry.

INDUSTRIAL APPLICATIONS
(see the context above)